Hello everyone and welcome to our end of week devlog!

This weeks focus was on script writing and Sonja's Apartment.

Sonja's Apartment is coming along nicely. The evidence board; which for the longest time has only existed in unused assets from the 2D version of Dead Heat and concept art is now in Sonja's Apartment! The board will be located in the office space of the apartment. If you would like to hear more about how the board will work, please check out A Case for the Board.

We've added some more details to the kitchen and office scene including a small apartment sized dining table and a bureau for Sonja's Office space. I've always wanted to add a bureau to one of my projects and certainly wanted to add one to this project. Sonja's desk in the police station wont be a bureau, so adding one to her apartment is the next best thing. 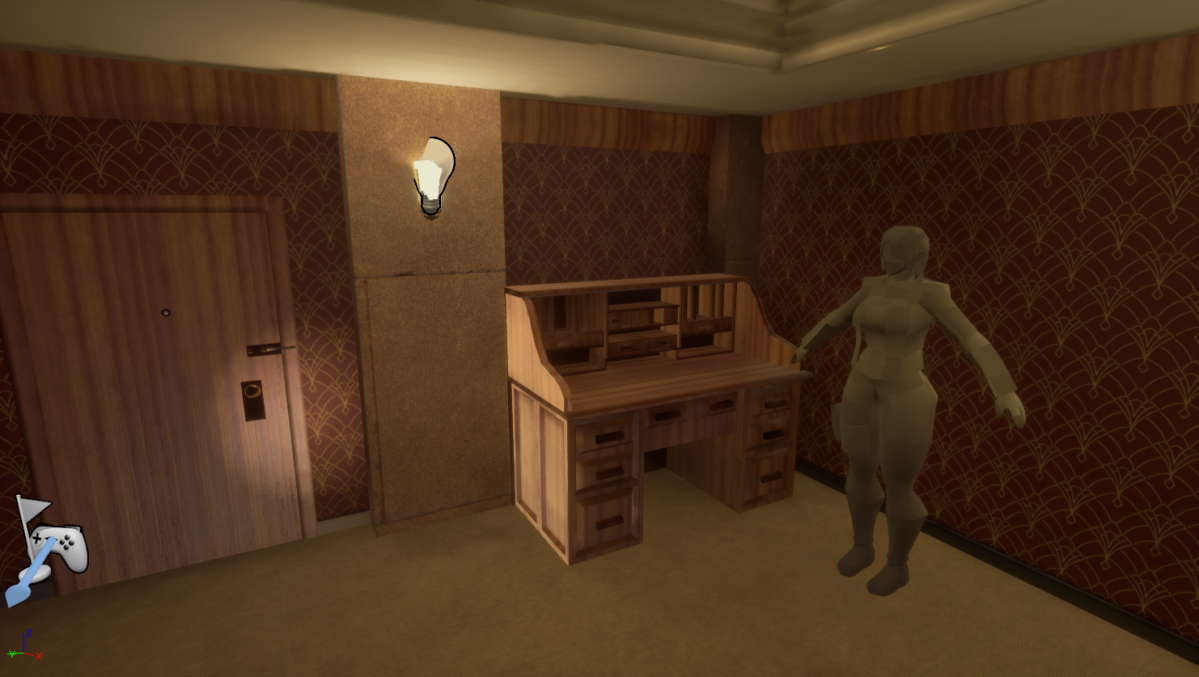 Filling out the apartment with details like this is always one of my favourite parts of design. Each little item presents a new opportunity for a really good scene to be centred around it. Like a conversation across a table or a scene showing Sonja and Lilith gathering in the office space debating the merits of the current case web.

Speaking of the writing, this week saw the end of the three script experiment we had been working on for the last couple of years.

The three script idea was flawed from the get go. The idea behind it was to let the player experience the characters as different kinds of people, with one aspect of them maximised: Their sense of duty and morality with Clean Cop. Their seedier and morally grey side for Dirty Cop and their more dubious and villainous sides with Black Widow. If one of those sounds redundant then you're absolutely right. Dirty Cop was the weak link, but the whole system seemed to fracture into three boring characters what would have made up one really good character.

Why am I only noticing this now? Because I last left off my writing back in May of this year to focus on the design and management of the project. Recovering from the disastrous HPS1 demo disc demo and planning a better one to replace it. When we finally got voice actors on the project and returned to the script, I realized that I had left off with a few technical mistakes in the scripts that needed to be fixed.

While checking through the scripts and proof reading them for any more mistakes, I noticed something that, honestly made my stomach turn. I only really liked some parts of the Clean Cop and Black Widow scripts. Dirty Cop was stale, tacky and frankly shit. The original thought process behind Dirty Cop was that Sonja and Lilith were both gruff no nonsense detectives with shady pasts, but that makes for a pretty piss poor base for a character. It doesn't in anyway make them complex or fascinating. It just made them come off as bitchy assholes for no reason. Everyone came off as that in that script.

The more I thought about it, the more the three script idea fell apart when considering how much more work would be needed just to make all of them adequate, when I could spend an equal amount of time perfecting two scripts. One for Sonja, and one for Lilith. Better to have one really good script than three mediocre scripts.

So I decided to take the best parts of the two scripts I liked and combine them together into one for each character. That way, we got the best elements from both.

If there is a moral to this story, its to not experiment early and to not build that experiment into your projects foundations. Just because you haven't seen it before, doesn't mean that there isn't a good reason for that.

I remember seeing a devpost that Hairbrained Schemes; the developers of Battletech, did a while back during the Battletech kickstarter. They mentioned (and I am paraphrasing here):

'Everything would be nice to have. Game's Development is 10 pounds of good ideas in a 5 pound bag.'

This has constantly rung true and rings just as true here. It would be great for Dead Heat to have three different scripts for both Sonja and Lilith so their dialogue can match their reputations better, but it is simply not feasible to do it now for the sake of quality control.

We have just had our first recording session with the new script and the results are far exceeding the old scripts.

As always, we will keep you all updated regularly as updates are added to the project on our Twitter and our Discord of the Dead: https://discord.gg/r8rQv6h

And remember, if you like the project and want to support us, please donate to the project's patreon page: https://www.patreon.com/DeadHeat

Every little helps keep us going!

Originally, I had planned to stream every Wednesday, Friday and Saturday. However, recently university work has been taking more of a toll on my time as we are nearing the end of the year. Normally the end of the year wouldn't be this bad, but recent international pandemics are compounding assignments closer together, so regular scheduled livestreams will be very difficult. I will try to stream during the week, but these will be mostly short game streams in between Uni or project work.

This cursed year is almost over, folks. All we need do is hold out just a little longer.

Thank you for reading our devlog and I hope wherever you are, staying safe and staying afloat.